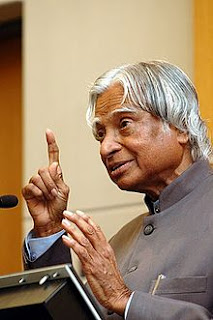 Inspiring and motivating speaker , A. P. J. Abdul Kalam, who won the hearts of millions of Indians by his visionary speeches had following comments in his recent publication Turning Points.  This also underlines the importance of draft versions of one’s final speech. (Emphasis added)

… Preparation for the speech normally began well in advance. We would generate a theme, then would seek information from multiple departments and also try and get the international picture on the subject.  We would send a questionnaire to experts. Then we would collate the information. The speech would go into numerous drafts. It was not unusual for there to be ten or more drafts. The R-Day speech in 2004 ,for instance, had its theme on smiles on billion faces and went through ten drafts. The focus was on values. On 14th August 2005, the theme was energy independence. The speech went through fifteen drafts. One of the highest number of drafts was, of course, for my speech to the European Parliament on 25 April 2007. This went through thirty-one drafts.

No wonder that Kalam’s speeches enjoys not only popularity but also coveted place in the heart of Indians. This really makes one to think on the efforts that we are investing in our own speeches.