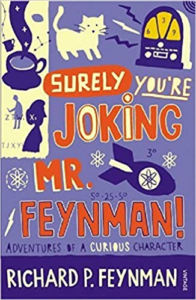 I read this book. It is a “book-of-the-month” in my book club.

First I wonder, why haven’t I read this book before! I was aware of the book and have even seen it multiple times when someone was reading it. As of this writing, the book is rated 4.25, with 171,849 ratings with 6302 reviews on Goodreads. A clear sign that it is a top-rated book.

I not only enjoyed the book but learned a lot about how scholars and researchers approach life!

And why was Feynman labeled as “most brilliant, iconoclastic and influential” by the New York Times.

Book is worth your time, and it should be on your reading list, mainly if you are science bluff or interested in academic life. Book rekindled my interest in biographies and memoirs!

Ten things that I learned by reading this humorous book.

Being a father of a teenage daughter, sometimes her doubts and queries make me restless. But I shouldn’t. In this memoir,  Feynman kept on exploring science and his interest in radio repairing, designing an auto-cutting tool for cutting beans. At one point, he almost burned his home; at another cut his finger. But that’s the way kids learn. Let’s encourage them. That’s real learning.

Feynman stole the door of a hostel-mate in MIT! He kept banging his drum. This banging he did at midnight on the La Almos campus. La Almos was the site for the atomic bomb research.  He tried all weird tricks on girls to win them. He experimented with Hypnosis, mind-reading, and smelling like a dog. He even slept on the Sofa/Coach in Institute, where he joined the next day and enjoyed life.

Feynman was a theoretical physicist. He excelled in it beyond doubt. But he also took biology as one of the particular subjects. Fellow students mocked him for his lack of basic knowledge and pronunciations of biology terms in that class. But he worked hard, found that it is easy to find research questions!  He studied to the extent of working with Watson (Of famous DNA inventor Watson & Crick). In his curriculum, he studied philosophy and worked on how to sleep and one’s thoughts on sleep. He wrote a term paper on sleep and thoughts.  He developed and retained the knowledge until he got involved in the sense-deprivation tank and offered himself an experiment subject.

We often have some side hobby, side projects. But if you take it seriously, you can develop deep expertise in it. Feynman’s second wife took him to Mexico to see Mayan ruins. For her, he read a bit and studied about Mayan culture. In later years, Experts called him to give a session on the Mayan culture and Babylon mathematics! He also learned safe cracking to the extent of befriending a professional safe-cracker.

Though Feynman worked on the Manhattan project in later years, he found it challenging. In the selection stage – the Army rejected him on the grounds of mental health! Once, Army called him as an advisor. But acknowledging his lack of knowledge about the fuel consumption of tanks, he retracted. Once, he got involved with the selection of books for schools. He found that many people on the committee rated books even without reading them. (One of the books was completely blank with just a cover, it wasn’t ready for print). Just a little bit of suggestion saved 2 million dollars for students. But consciously, he stayed away from Government projects.

Feynman learned drumming. He even professionally played it in an Orchestra for ballet. He played in Brazil’s Samba Festival too. He used to debate with an artist friend on art vs. science. To understand his point of view, he learned drawing and painting. The client commissioned Feynman to make a painting. And he even sold some of his images at elevated rates. And his life was fun.

He learned multiple languages throughout the period. He babbled in Italian as a teenager – though it was wrong.  He met a girl at Party and learned sign language from her. He knew Portuguese before visiting Brazil. He played with the Japanese before visiting Japan. His experiences in these countries were completely different compared to his colleagues. He could interact with locals, had fun with girls, and went out of the way to enjoy the local culture.

Abraham Pais – his colleague and friend, said this. That time, Time magazine called Pais for an interview. Feynman agreed with this opinion. When Feynman received the Nobel prize, he asked a journalist – how he can refuse or decline the award as he realized that he would be in the limelight after that. On many occasions, Feynman has gone to extreme lengths to hide that he is visiting a place or talking to students in physics. He thought it ruined his peace. And those who are not interested in Physics are bothering him.

While working at Caltech, Feynman was offered a job in Chicago. But he didn’t allow them to tell him the offer. And finally, he declined it. The offer was almost three times his existing salary. Even after conveying a paycheck, he refused it. He said that a higher salary would distract him from his work, which he enjoys more!

Feynman wanted to work in Bell Labs. Bell Labs were using a lot of physics and inventing new things.  Feynman visited Bell labs frequently. He networked with his seniors and canvased for a job.  But he didn’t get a job. Finally, he landed in a friend’s startup unit as a chemist! That’s where he started his career. So one of the great physicists of our time started his career as Chemist!